Now that Christmas is over, it’s on to New Year’s Eve. It’s still 3 days left until then, but occasionally one can already hear firecrackers fired outside. Reminding that it’s time to decide how one wants to spend this evening. We decided to spend this New Year’s Eve with only few people, and I already know I’ll serve something lighter.

I don’t know about you, but I feel like I’ve over done it with food this Christmas. Soups, roasts, cakes, cookies, salads. Although the house was full of people, it only slowly looks like there is less food in the fridge. Despite the fact that we cooked for more people than usual, I probably still should include lighter and not so hearty meals in my resolutions.

And so I thought of serving this salad to my guests. We made it before and we really enjoyed it. Inspired by a recipe from Slowly Veggie magazine, this looks like what I was looking for. I found this recipe while I browsed for christmas menue ideas, but eventually we served something else at the feast. New Year’s Eve offers another opportunity to surprise the guests. I thought of adding a slice of salmon on top of the salad, because I intended to serve it as a main dish. This will be perfect with other side dishes I had in mind for the evening.

If you’re with me, and still looking for inspiration, but the salad isn’t what you’re looking for, how about these zucchini rolls or pears in parmesan for starter?

ca 100g arugula or other salad

Place the walnuts on one of the baking trays and roast for 4 minutes. Move them on a plate and let it cool down, then chop.

Peel the vegetables. Slice the carrots and parsnip in even slices, cut the beets in half and slice. Cut the sweet potato in half and slice in 5mm thick pieces. Spread the beets on one of the baking trays, drizzle with oil, season with salt and pepper.

Toss the remaining vegetables to a bowl, season with salt, pepper and 3 tbsp of oil and mix. Spread the vegetable evenly on the other baking tray and place them both in the oven for 10min. After that time stir the vegetable so they cook evenly and roast for another 10min until they start to brown. 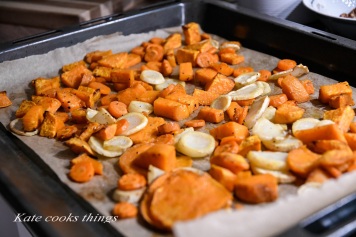 To make the dressing, combine all the ingredients in a jar, screw the lid and shake well.

To assamble the salad, place the arugula, chickpeas, walnuts and the vegetables to a bowl and mix. Pour the dressing over it and combine well. Spread evenly on the plates and serve. 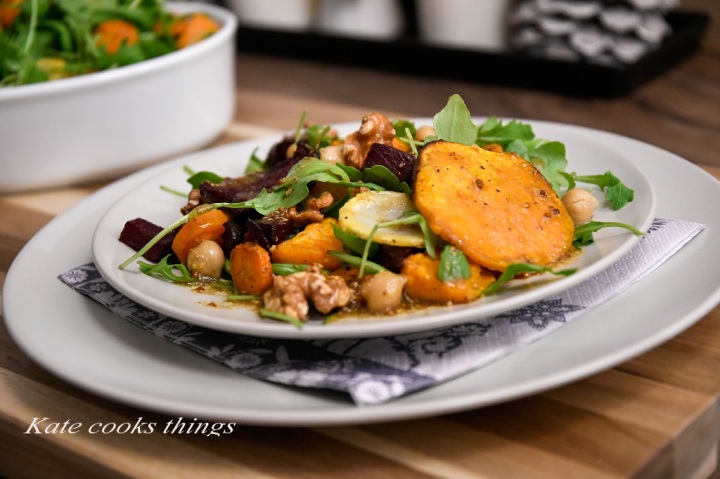 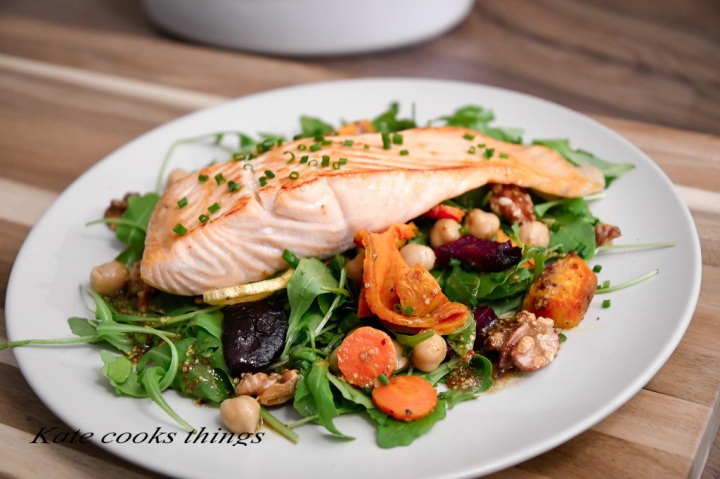 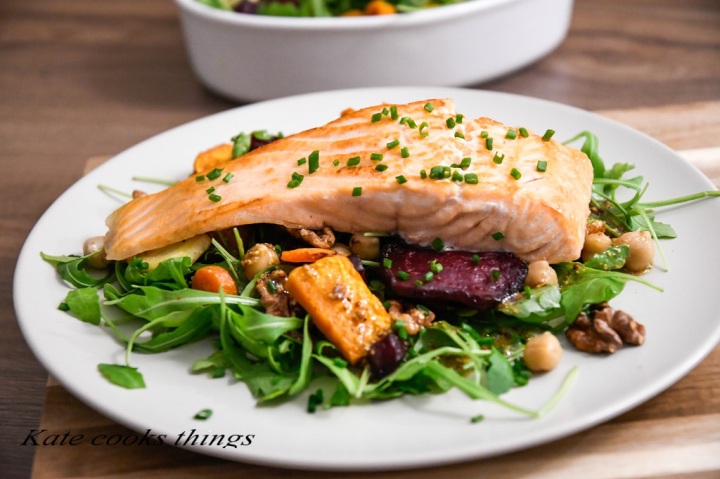