Asparagus season is upon us, and to be honest it’s one of those things which you can hardly miss here in Germany. In the cities, most of the restaurants will proudly anounce the beginning of the season on the blackboards with a variety of new recipes. Even the little veggetable and fruit stands spread across Munich have now asparagus on offer.

The asparagus stands on the sides of the roads are open, even these in the middle of nowhere, also opened their doors to those driving by.

When I moved to Germany I found it quite amusing then. I knew this hype from other countries, but never to this extent. But very soon I’ve also fallen for this veggie. Now I do enjoy it and cook it as often as I can. But to be honest I do prefer the green one, so this is the one which lands most in my shopping basket. Not sure Philipp shares my preferenes, but so far we established that he likes it a bit mushy, whereas I opt for a bit crunchy.

I tried to combine both of our preferences in this recipe, mushy inside and a crunchy side. It turned out mushy on the inside alright, but the side due to the searing in butter was also softer. In the end though, it didn’t matter because it was really good!

salt and pepper to taste

For the ravioli, combine the flour, eggs and oil with the salt and knead to a smooth dough. If necessary, add a little water or flour. Form the dough into a ball, wrap it in plastic wrap and keep refrigerated for about 30 minutes.

Peel the lower third of the asparagus and cook the rods in salted water for about 8 minutes. Quench, drain and dice 3-4 small rods. Cut the remaining asparagus into 3-4 cm long pieces and set aside. Mix the diced asparagus with the ricotta, parmesan and egg yolks and season with salt, pepper and nutmeg.

Take the dough out of the fridge and divide into 3-4 portions. Knead well again. Using a pasta machine or on a lightly floured work surface with a rolling pin roll out the dough to about 3mm thick sheets. The thinner the dough the better. Spread the rolled out dough, divide into 2 and at intervals of approx. 4 cm place about a tsp of the filling on one half and smear the egdes round the filling with egg white. Place the second half of the dough over it. Press the dough well around the filling and cut (or cut out) square dumplings with a pastry dough. Alternatively you can cut out the egdes using the rim of a glas and sealing the egdes of the ravioli pressing it with a fork. 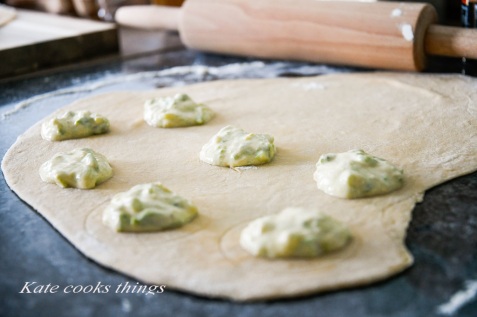 Fill a large pot with water, salt and bring to the boil.

When all ravioli are formed place few of them in the water and let simmer for 5-6 minutes. After that time, fish the ravioli out using a slotted spoon and place on a plate.

Swirl the remaining asparagus pieces in hot butter and brown until golden. Serve with ravioli, sprinkled with freshly grated parmesan. 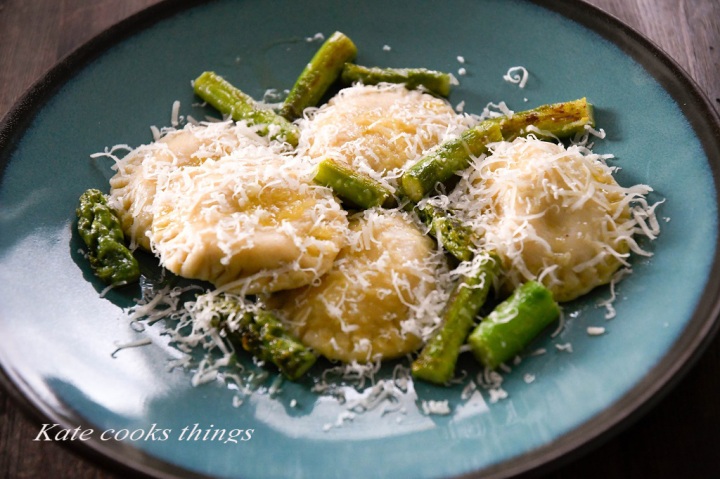 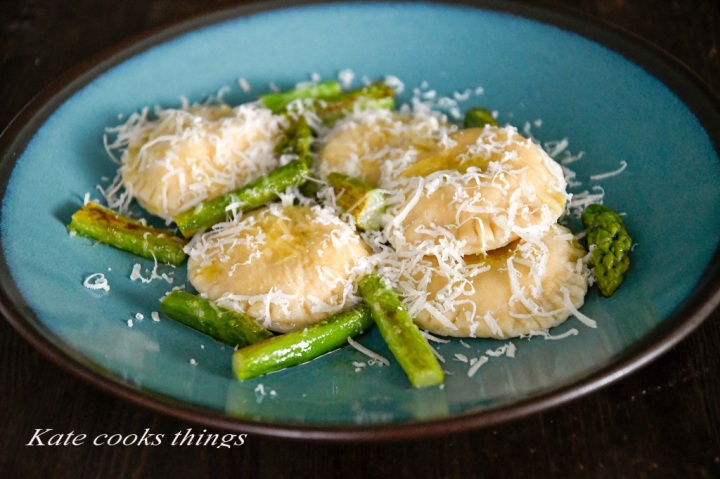 4 thoughts on “Ravioli with asparagus and ricotta filling”